Garden of Hope stand against abuse 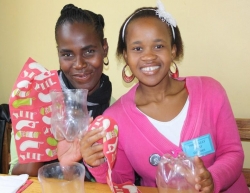 RESIDENTS from the surrounding rural areas gathered at The Valley Trust in Kwa Nuswya to take a positive stand against violence against women and children.

Each flower will have a message written on it in honour of a victim or a survivor of abuse or as a pledge against rape and violence and will serve as  a peaceful, creative and affirming vow against women and child abuse. The flowers will then be “planted” in the specially-created Garden of Hope and Healing: 16 Days of Activism for No Violence against Women and Children, at the Visitor’s Centre of the Durban Botanic Gardens from 25 November to 10 December.

There will be flower-making workshops at Durban Botanic Gardens for the duration of the campaign. Everybody is welcome to participate in these workshops and contribute their flowers to the garden. Workshops for large groups / corporates / NGOs can be run on request.

The garden will also feature “a Bottle Tree” with hundreds of secret messages sealed in tiny glass alcohol bottles, from the PRC Men’s Forum, as their pledge to help in the fight against violence against women and children and a symbolic “Washing Line” with black garments paying tribute to Thursdays in Black, a programme run by Diakonia  Council of Churches to encourage men and women to wear black every Thursday to raise awareness around issues of gender justice, violence against women and corrective rape.

There will also be an exhibition with resource material, discusssions, workshops and events offering information and support to those affected by violence and creating awareness amongst the public about the daily abuse of those vulnerable in society.

After the campaign, the flowers will be displayed in appropriate places such as courts and places of shelter that deal continuously with this problem as a visual display of the public's affirming support for ending violence against women and children.